GU272 descendant Cynthia Satterfield recounts her experience working with the GU272 Memory Project to record interviews with members of her family and other descendants. She is descended from the Sam Harris family. 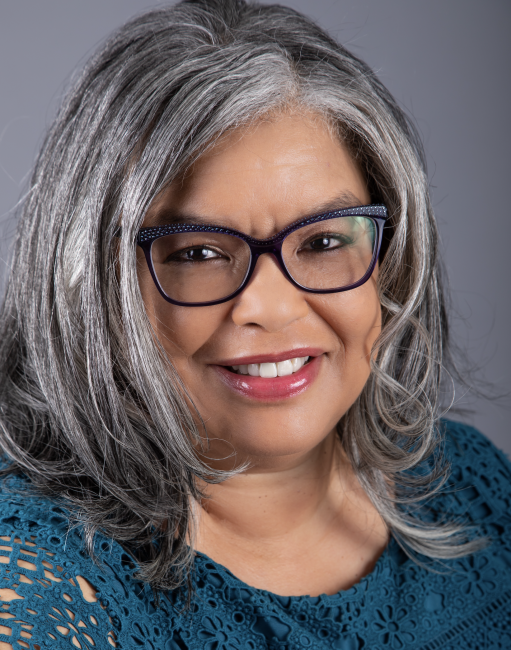 My name is Cynthia Satterfield. My family calls me, “Cissy”, “Cis” or “CiCi”. I wasn’t the first to hear about the Georgetown University revelations, but like it’s always been in my big family, news travels by word of mouth from household to household. Once I heard about our lost history, I called myself to action.

My father was an airman from Baton Rouge. My mother was born in Maringouin, Louisiana, the last of nine children. Her mother died young. She was raised by her sisters and brothers. Home has always been about family to her. In her teens, Mom and most of her kinfolk had moved West during the Great Migration.

I was born in California in the 1950s. My childhood was spent living in Europe, California, and the Middle East. Along with my parents, my cousins, aunts and uncles taught me how to laugh with and love one another. We would get together for no reason other than to be together—especially if some of us had traveled a great distance—then we’d all eat, dance, and tell stories.

I learned that I had a place in this world, despite the racism that prevailed in America. I experienced hate for “Yankees” in foreign lands, too. Above it all there was something uniquely special about how my family loved each other that gave me pride, although I couldn’t quite put my finger on the origination of such deep bonds.

For example, Mom had an older sister, who we simply called, “Auntie.” She cooked like Jesus in the miracle of the five loaves and two fish! There was plenty of food for anybody who came through the door: cakes, pies, meats, fresh fish, big buttered rolls or cornbread, greens, and beans. In her Northern California backyard, there were fruit trees and a vegetable garden. Mom would sit underneath the shade of a tree and grab a peach or plum or suck on a messy fig.

We kids would take turns rotating the ice cream maker, anxious to dip in. While the kids ground the ice and salt, the adults would reminisce about churning butter and how hard and long a job it was in the Louisiana countryside.

After cousin Dorothy and Auntie’s other kids had grown up, annual picnics were organized in the East Bay at Berkeley’s Tilden Park. Family would come from near and far for the delicious barbecue. The extended family had grown so large that we needed a big enough space to play ball or visit each other’s picnic blankets to taste the various morsels. It was great fun for many, many years.

Those years came and went. Young ones grew up and created their own family units wherever employment or school took them away. Times changed. Small spats made picnic planning difficult.

As we got older, reunions occurred mostly at the family’s now frequent funerals. In our grief, we’d vow to do better, to see each other in better times like it used to be. Before long, we stopped knowing to whom the littlest ones belonged; there were too many children to count. Our trips back to Louisiana became less dependable. We were giving up. We began to rely on Facebook or Instagram to connect.

Then the Georgetown University saga was exposed—our unknown but shared history rooted us to each other once again. Hallelujah! Our ancestors rescued us! (Inside my mind appeared the radiance of those many departed. In that breathtaking realm I was uplifted. The pivotal truth about my own existence was born...)

I attended the GU272 Reunion was held in Maringouin, Louisiana in June, 2018. My cousin Duke had traveled from Los Angeles, making us the only two West Coasters. It was a joy to see and embrace family members, including my cousin, the actress S. Epatha Merkerson, who I hadn’t seen in a few years.

I first spotted Richard Cellini, the founder of the Georgetown Memory Project, at the reunion. He was wearing his trademark wide-brimmed straw hat, and had a deep, charming voice with a humorous lilt that swung from high to low. When later I listened to Richard speak to the audience about the forgotten slaves, a mysterious door unlocked for me. After I returned home to California, I wrote Richard often, declaring that there were plenty of GU272 descendants as yet unaccounted for on the West Coast. He emailed a reply that delighted me. “You can be the West Coast Branch of the GU272!’, he wrote.

In the lobby of the Port Allen Hotel, where many of the reunion guests were chatting, I met Claire Vail, director of the GU272 Memory Project. Claire and her colleague Meaghan Siekman, a genealogist and a PhD in public history, had traveled from Boston from a non-profit genealogical organization called American Ancestors to conduct interviews with descendants for a website they were building.

I was the last person do an oral interview at that Port Allen hotel. Meaghan was my interviewer. Her manner was steady and dedicated. I told my tales without pausing, focusing on Meaghan’s eyes the whole while. Excited by the experience, I went back to my family and told them that experts were flying from the East Coast to record their personal stories for the sake of future generations!

After I got home, I joined the Georgetown Memory Project (GMP), through which I was introduced to Judy Riffel, the GMP’s chief genealogist. I had so many questions. My cousin Leroy and his wife, Rose had been working on a fine family genealogical tree for decades, and had invited me to get involved, but now I felt pressure to get results fast. Judy told me to have my oldest living relatives take an Ancestry DNA kit to establish the authenticity of our bloodline.

I bought three DNA kits. After sending each kit for analysis, I’d replace it with another kit. So far, I’ve assisted nine of my relatives including myself. I discovered I belong to the Sam Harris lineage. Judy helped fill me in my tree with documents she found through Louisiana court records. Soon I started doing my own searches. Slowly, my mother and I opened up about people and the past. It gave a new clarity and sense of purpose to our relationship.

In fall of 2018, I received a letter from Dr. Linda Mann of the Georgetown Memory Project. Together, Linda, Claire, and Meaghan were coming to Oakland, California to conduct more GU272 descendant interviews. Thrilled, I told my family that experts were flying from the East Coast to record their personal stories for the sake of future generations!

Linda and I worked together to bring my family out to the event. Linda, a compassionate interviewer and expert oral historian, took the time to call every descendant in the area. I wanted each of my mother’s siblings to be represented. I worked on my grandmother’s sisters’ lineages too. Even if third and fourth cousins could not attend, I asked them to volunteer family database information. At the same time, Judy and I documented and corrected numerous entries for the sake of future generations.

Logistics were tough for the older folks. My aunt was 91. Others were in their 80s. I planned the carpools. By the time of the event, we had more descendants than we could slot a time for recording! Ten of my family members gave their testimonials. Three generations were documented. Thirteen of Sam Harris’ descendants participated in Oakland. When the interviews were done, we all went to brunch to celebrate.

Now working together as a team, in March 2019, Claire, Linda, Meaghan and myself traveled to different parts of Louisiana collecting oral histories. Linda and I gathered folks together in Baton Rouge, Houma, and New Orleans. I was ecstatic to venture back to this GU272 homeland. My aunt Myrtle had lived her whole life in Louisiana, never migrating to the West in search of work. She needed to be honored, too.

On our last day of the trip, we drove back to New Orleans in a fierce rainstorm. St. Patrick’s Day was coming up, and Meaghan—who is of Irish extraction--was looking forward to celebrating in Boston with her husband and baby. I sang “Danny Boy” to honor her ancestry, and to entertain my new friends.

Both this trip and the California journey were treasured -- and very personally meaningful -- memories for me. In California, we interviewed 10 descendants of Sam Harris. In Louisiana, we conducted interviews with a half dozen kin of mine, and I personally interviewed three descendants who were unrelated to me. I was so pleased to be able to help out and meet other GU272 descendants.

The dedication of this wonderful website to the descendants of the Georgetown University slaves is a monumental message of faith, hope, and courage. It is a privilege and a blessing to have contributed to its creation.