Motivated by a desire to bring innovative digital resources to valuable research projects globally, the creation of this website has been generously funded by Helen E. R. Sayles, CBE, and DuWayne R. Sayles of Concord, Massachusetts. 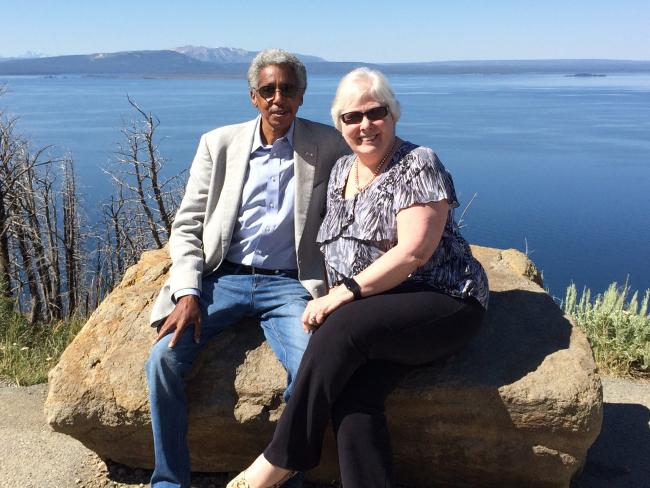 According to the Sayles, “The remarkable story behind the GU272 Memory Project ignites the soul of every human being who struggles with the history of slavery at any time and in any place. Unlike some events, however, in this one there are ways that we are able to advance to accurately document the meaningful lives that the slaves of the Jesuit plantations led in the 1800s—and that their descendants may now celebrate and proudly continue.  The data found here on this historically-rich website will assist generations to come to find, give identity to, and connect with their ancestors from this recently recovered history.”

Prior to her retirement in 2012, Ms. Sayles was senior vice president and manager of human resources and administration for Liberty Mutual Group*. She began her career with Liberty Mutual in the information systems area, and her career encompassed a broad range of functions and responsibilities. An active member of the community, Ms. Sayles has served as a past board member of Cambridge Family and Children’s Services and co-chaired their first Capital campaign to fund a permanent home in Cambridge for the agency.  She also was a board member for Center House, now a part of Bay Cove Human Services, where she served as chair of their Executive Advisory Board.  In addition, Ms. Sayles served as a board member for InRoads of New England and as a director of The Initiative for a New Economy.

In 1995, Helen was presented with the Leadership Award to Women in Business by The New England Council.  Having served in leadership positions to raise funds for women and girls through the United Way, she was asked to be a co-chair for the United Way Today’s Girls Tomorrow’s Leaders Women’s Breakfast in 2005.  In 2010, Helen was honorary co-chair of the Greater New England Minority Supplier Development Council Awards Gala.  That year, she was also honored by Cambridge Family and Children’s Services with the Avon Children’s Friend Award.  In 2011, Helen was presented with the Girl Scouts of Eastern Massachusetts’ Leading Women Award.  In 2013, Ms. Sayles was asked to preside as Honorary Clan Chieftain for the 38th Annual New Hampshire Highland Games and Festival at Loon Mountain, New Hampshire, the largest and most diverse Scottish cultural festival in the Northeast.  A member of Scotland’s national economic development agency’s International Advisory Board from 2002 to 2009, Ms. Sayles is also a GlobalScot and was inducted into the GlobalScot Hall of Fame in Glasgow in 2011. In 2014, Helen was awarded a CBE (Commander of the Most Excellent Order of the British Empire) in Her Majesty The Queen’s Birthday Honours.

Currently, she serves as Chairman of The National Trust for Scotland Foundation USA; President of The Saltire Foundation, USA; and Director of Entrepreneurial Scotland.

Prior to his retirement in 1993, Mr. Sayles was a consultant for various corporations in the area of systems analysis and applications development, including: Sears, John Hancock, and Addison-Wesley Publishing. He began his career with consulting firm Arthur D. Little in Cambridge, MA in the computer operations department and quickly advanced to the level of mainframe systems programmer. Mr. Sayles then established a technical support department in the computer information services area of the company, where he worked among all departments of the organization providing technical solutions in the areas of computer related issues. While still employed with ADL, Mr. Sayles became a consultant within the operations research department where he aided in developing customer relationship management applications for large clients.  After leaving Arthur D. Little, Mr. Sayles held a variety of positions with Computer Usage Company (CUC) of Sunnyvale, CA International Data Corporation (IDC) in Waltham, MA., Genrad, Inc. in Concord, MA. and AGS Consulting in Reading, MA.

An active member of the community, Mr. Sayles created his own non-profit company as an Internet Service Provider (ISP) providing free internet services including web design and implementation, email services and micro computer repair to the elderly. Additionally, Mr. Sayles developed applications for the non-profit community and consulted on how best to use the changing web-enabled environment.  Clients such as New England Mountain Bike Association have benefited from his skills.

DuWayne lives in Concord, Massachusetts with his wife, Helen.  Mr. Sayles was born in Pittsburgh, PA and was educated at Shadyside Academy in Pittsburgh and Boston University in Boston, MA.